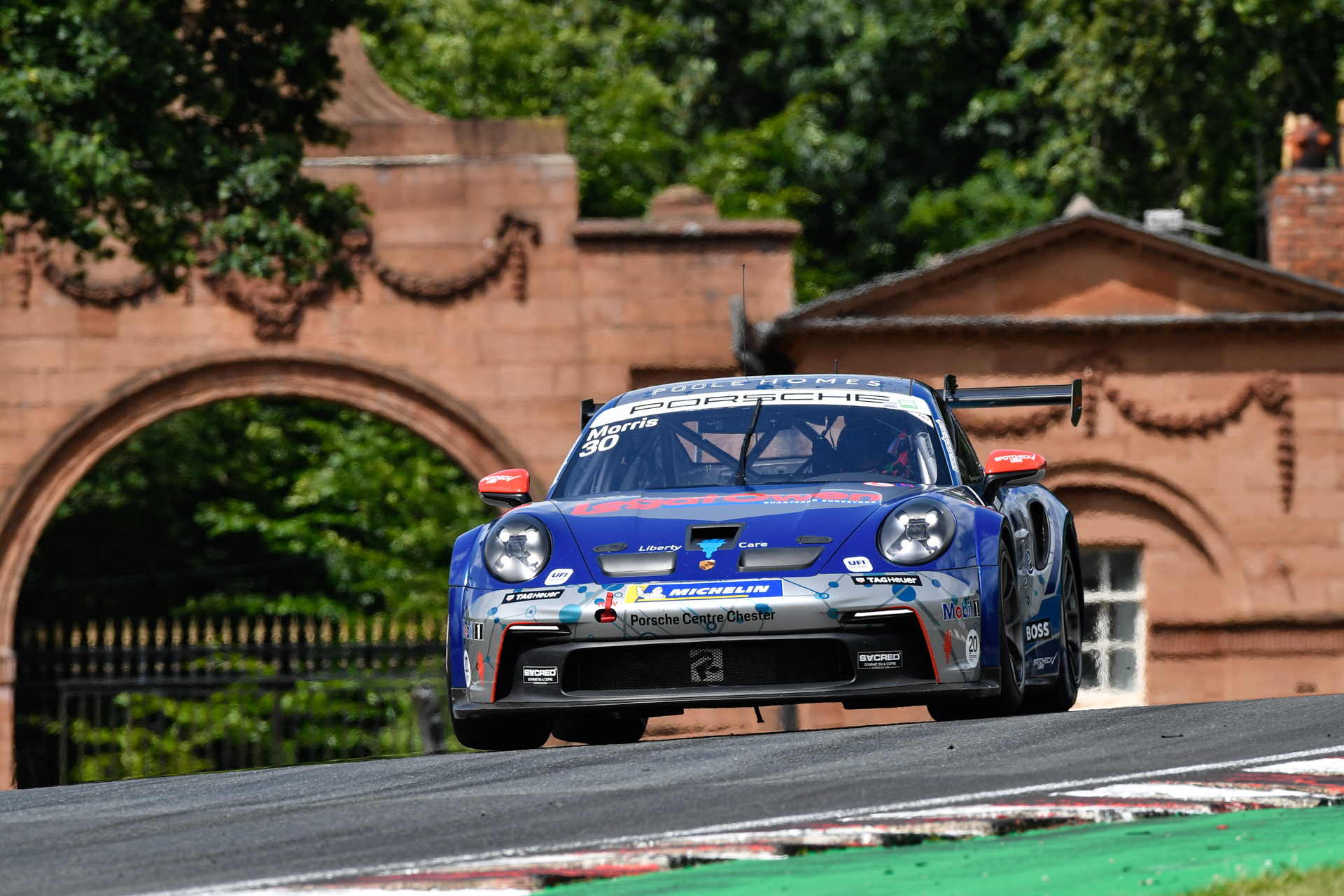 Seb Morris endured a tough weekend in the Porsche Carrera Cup GB as he raced on his home circuit of Oulton Park last weekend (June 11/12), being forced out of both races through no fault of his own.

With an official test day on the Wednesday ahead of the event, the Chester-based racer was able to continue his familiarisation with the tricky Porsche 911 GT3 Cup car, finishing the day fourth quickest. He carried that form into free practice, ending up with the sixth fastest time of the day, just 0.2s off the top spot.

Qualifying first thing on Saturday morning, the Team Parker Racing driver would finish the session disappointed to be eighth overall as he wasn’t able to hook up a perfect lap, running for the first time this week on brand new tyres having saved sets for when it mattered most.

On the first lap of the opening race that afternoon, the Welshman was hit by Theo Edgerton, dropping him down a spot, before the Safety Car was called and the race red flagged to recover cars from the gravel. Unfortunately, on the second lap of the restart, Edgerton ran off track and Gus Burton lost control of his car, sending him into Seb, damaging his car and causing his retirement.

Sunday’s race, broadcast live on ITV1 but shortened to a maximum of 20 minutes, started cleanly, but side-by-side contact on the third lap approaching the Island hairpin, causing him to go up the escape road, turn around, and push to catch back up to the pack. However, a further problem halted any further progress, as he unexpectedly ran short on fuel.

There is now a six week break in racing for Seb, before he returns to the Porsche Carrera Cup GB at Scotland’s demanding Knockhill circuit, near Fife, over the weekend of July 30/31.

“We made great strides with the car this weekend, but in qualifying I struggled on the new tyres. Unfortunately, I’m still new to this car, couldn’t hook it all up, and then had an issue with my neck, so it just was a nightmare. I started ninth and I was taken out by [Theo] Edgerton. I was on the inside of the hairpin and he drove down the grass and crashed into me, which dropped me to tenth, and then on the restart I got a flying start, Edgerton went off again and came back on, Gus Burton had a big tank slapper and speared into the side of my car, punched a hole in the wheel, and the suspension was ruined, so that was the day over.

“I’m lost for words about race two. I had a good start and was pushed off a bit at the hairpin, so I had to go straight on and turn around and come back, so the race was pretty much over at that point. I had to try something because we were so far back that I wasn’t even in the points, and then we ran out of fuel, so we need to investigate that.

“I feel like we’ve found something with the car for sure. Kiern’s [Jewiss] qualifying result was amazing, and we are running the same setup. He’s followed what I’ve wanted to do with the car, but I just don’t think I’m quite there yet. I still haven’t had any testing since before the first race and there’s no way I can expect to go into Knockhill and be better if we don’t get back out in the car, so I think we’re going to have to use some of our testing allocation and get a couple of days under our belts.

“That will help me really start to understand this car, because in the race weekend there’s just not enough time. At Oulton we couldn’t run any new tyres in the Wednesday test because of the weather, so it’s just one thing after another and things keep stopping me being able to go on these new tyres. No matter how good you are as a driver, to jump into one of these cars with no ABS and no traction control on new tyres and expect to know what you’re doing without any testing is difficult.”