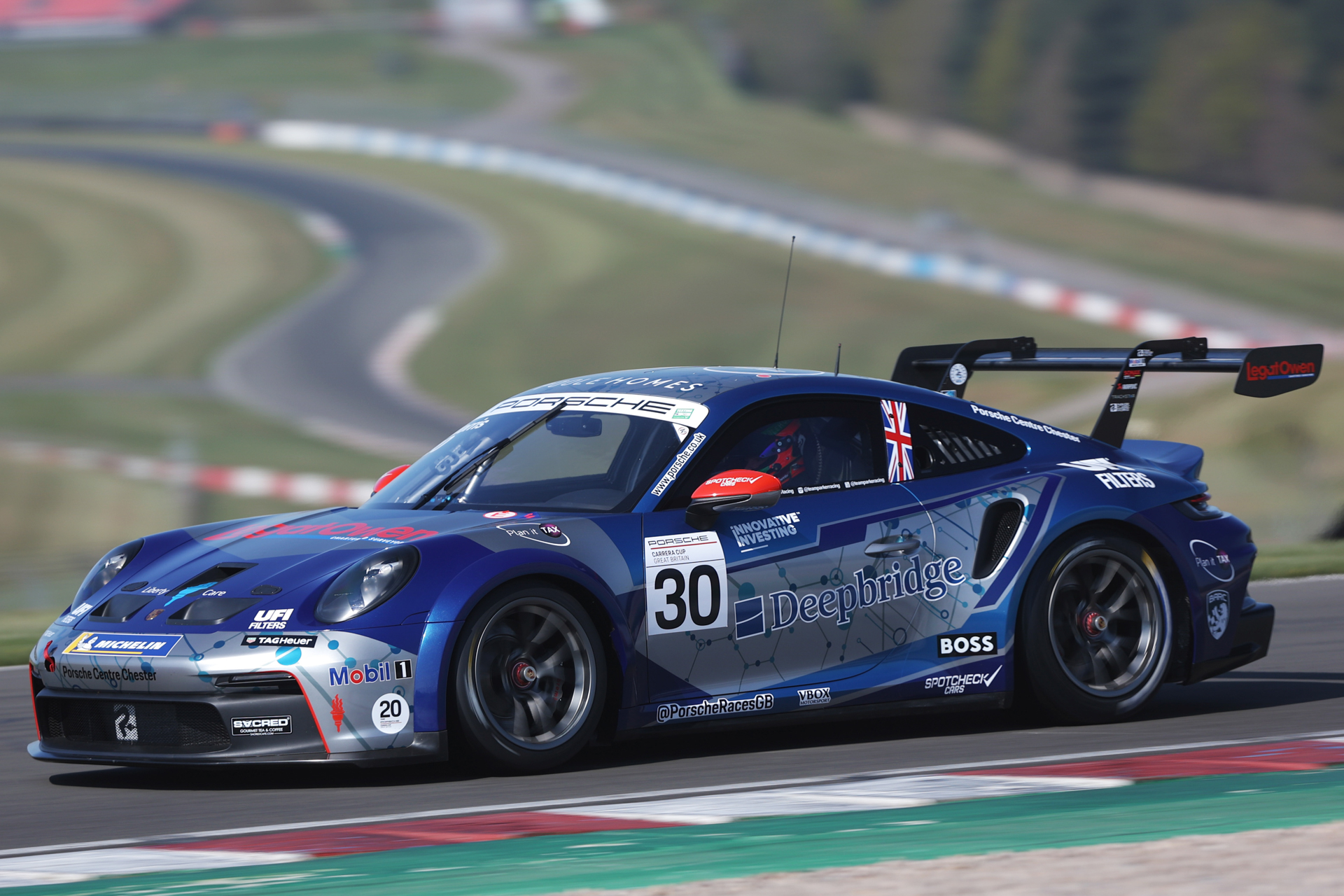 The Chester native, making a return to a full season on home soil for the first time since 2019, knew he would have a tough task on his debut, but performed well as he got to grips with the 992-style Porsche 911 GT3 Cup machine he will be racing this season.

With practice taking place on Thursday, due to local noise limits, Seb had to start his weekend on the back foot, as he suffered a puncture on one of his new sets of tyres, which then caused him to lock another tyre, ruining the set. With limited numbers allowed each weekend, it meant using up the set he would have used for race two in qualifying on Saturday, disrupting preparations.

Coming out of Saturday’s qualifying ninth overall, he was determined to make amends in the first 23 lap race on Sunday morning, getting a lightning start and making up three places, before taking fifth with a good move around the outside at Redgate corner. When team-mate and Pro class rival Kiern Jewiss fell down the order, he moved into fourth, but ultimately settled for fifth at the flag and some valuable championship points.

Seb made another great start for race two, broadcast live on ITV4, getting up to third position and providing great footage for the television audience with an onboard camera. Unfortunately, his practice puncture played a part as his used tyres made it increasingly difficult to hold off those behind him, once again crossing the line in fifth position.

He will next be in action in his Team Parker Racing Porsche at Brands Hatch on the challenging Indy circuit, over the weekend of May 14/15, with live coverage of the second race once again on ITV4. ITV1 will also be carrying coverage live during the day, further adding exposure for everyone involved.

“In the first race I had an amazing start from ninth all the way up to fourth and ended up finishing fifth. I knew what I had to do to go quicker in the second one, but unfortunately, I had to use a set of tyres from qualifying, whereas everyone else had new ones. I went from fifth up to third on lap one and then tried to hold them off but couldn’t and ended with a fifth place at the end.

“I actually said to myself, if I could get two top fives this weekend, I’d be really happy, as I’ve only had two days in the car. Some of these guys have been at it for years, and I’m learning very, very quickly, so everyone else needs to watch out because it won’t take me long.

“This is certainly not a step down from GT3 racing, in fact it’s much harder in many ways with no ABS, no traction control, and no tyre warmers. All those luxuries I’ve been used to for the past five years have gone. I am learning very quickly, really relishing the new challenge, and I am starting to feel like I love the sport again.

“I’m going to calibrate my simulator from Donington just to get everything perfect as I do a lot of sim work. I also train like hell and I’m really physically fit. I’m used to doing long distance races so the problem I had in the first race was I just felt like I was getting going and the chequered flag came out! I had a great test at Brands Indy, where we’ll be racing next. It’s a circuit I’ve done very well at – I’ve still got a GT3 lap record from 2016, albeit on the GP loop, and I’m looking forwards to it.”