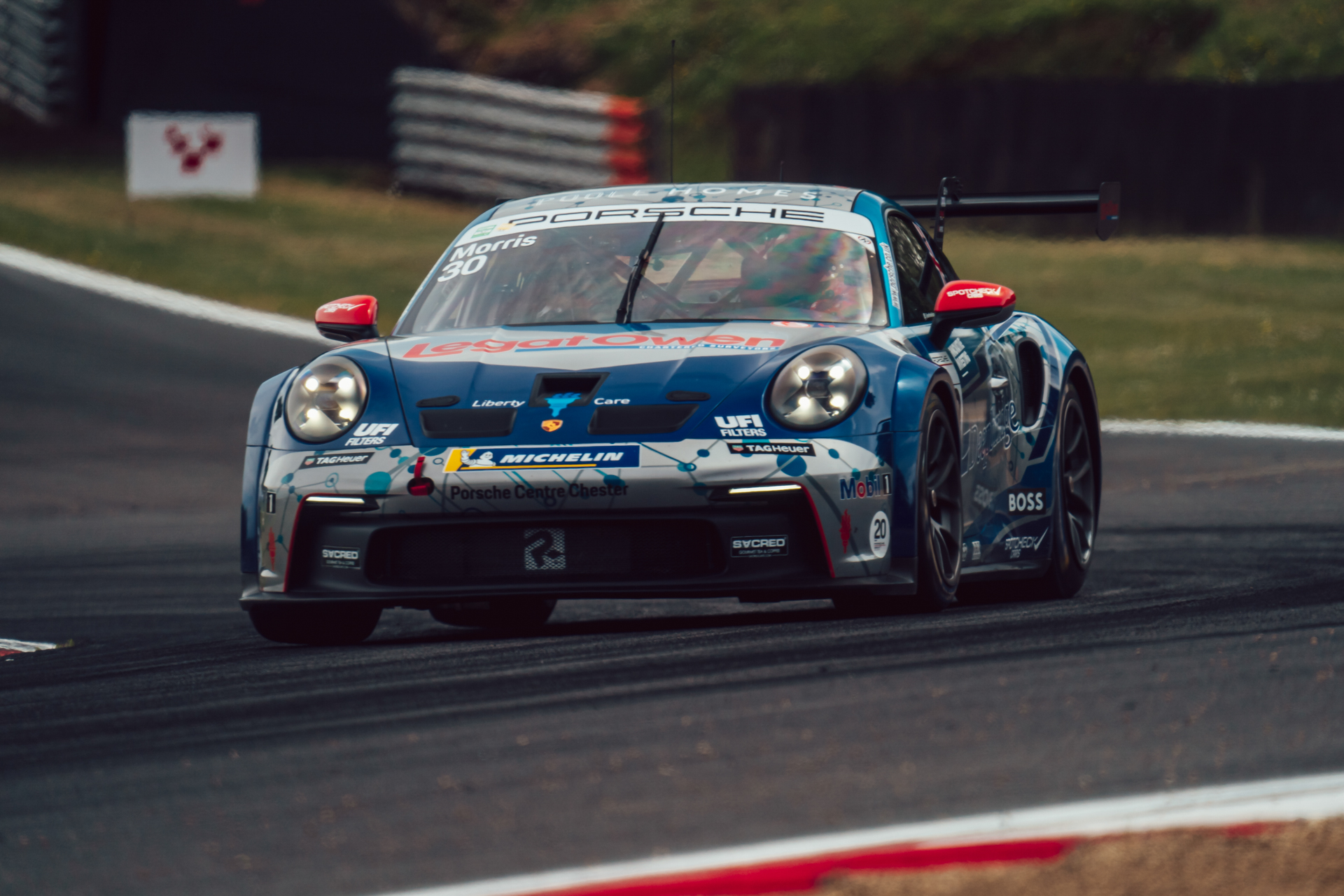 Seb Morris made his second appearance in the competitive Porsche Carrera Cup GB at the weekend (May 14/15) and, despite being a tough trip, unlocked some performance which leaves him in a positive frame of mind for the rest of the campaign.

The Brands Hatch Indy circuit, just 1.2 miles in length means little time for drivers to rest behind the wheel, and changeable conditions with warm sunny skies on Friday and Saturday giving way to overcast, damp, and wet weather on race day.

The Chester-based racer would finish practice eighth quickest of the Pro class drivers, albeit just 0.2s off the fastest time, but qualifying was less productive when contact from an Am competitor not only sent Seb off track but necessitated significant repairs which meant his Team Parker Racing mechanics worked until three o’clock in the morning, so he could race.

Lining up 17th overall for the opening 34-lap contest, he made up five positions in a race which was red flagged as rain began to fall with increasing intensity, sending several competitors off track, with a restarted five-minute dash to the flag thereafter.

Before the second race Seb and the team managed to understand a key missing part of how they have been approaching the season so far, which was aptly demonstrated on track. Slow off the line at the start, the Welsh racer fell back to 24th and last position but then started to pick off rivals despite fully wet conditions. Circulating at the same pace as the front runners, Seb made up an impressive 15 positions to finish the contest ninth overall and eighth in the Pro class and leaving him optimistic for the rest of the season.

Seb will next be in action at his local circuit, Cheshire’s Oulton Park, for rounds five and six of the 2022 Porsche Carrera Cup GB season.

“It was a fairly challenging weekend. In qualifying I took contact from an Am which took me off and there was nothing I could do about that. From there, it was always going to be a difficult weekend. I mean, everyone was so close, the whole grid was just nine tenths apart.

“I’m glad it rained in the first race, and we managed to get up to 12th, but the Safety Car and red flag was so long, we just didn’t have enough time to get up the field. Ahead of race two we found something with the car, and we were as quick as anyone, so I was really happy with that. I was hit by a driver just before the Safety Car and it knocked my alignment out, so I struggled after that. I was still as quick as everyone, but I would have been at Kiern’s sort of pace otherwise. I really enjoyed race two, I think I made up 15 positions from stone dead last up to eighth, so I was happy with that.

“It was a weekend of what ifs; we’ve just got to have a think about where we’ve gone wrong over the weekend. We found something massive that we’ve been doing wrong with the car, from my side, and I think we’ll unlock some serious pace at Oulton Park now. I really do.

“I think we’ll be quick so it’ll be nice to go there and surprise some people because I know how good I am around there, and I know how good our car can be now. We’ve just been missing a trick so far, so we’ll go there with our heads held high, and we’ve got a test beforehand as well which should be useful. I’ve still only had two days testing, I’d never driven this car in the wet, and I’ve done all right.”