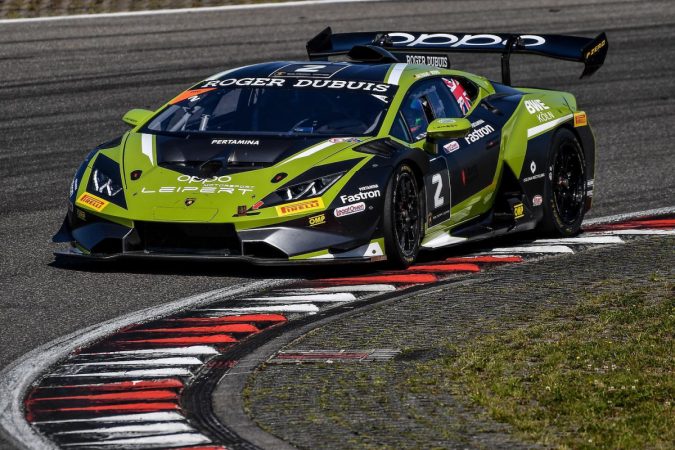 Posted at 15:37h in Uncategorized by sarah

Chester racing driver Seb Morris is ready to embark on the busiest race week of his long and successful motorsport career just a few days from now, when the eagerly awaited season finale of the Lamborghini Super Trofeo Europe and subsequent ‘World Finals’ take place in Italy.

Getting underway this coming Tuesday, 26th October, at Misano World Circuit Marco Simoncelli, no fewer than four races await former British GT Champion Morris – and he has his sights set on challenging for victory in the coveted World Final which will cap the week’s action next Sunday.

Morris, a former factory driver for Bentley in both GT World Challenge Europe Endurance and the Intercontinental GT Challenge, will be making only his second appearance of the year alongside team-mate Sebastian Balthasar at the wheel of Leipert Motorsport’s No.2 Lamborghini Huracan.

During his maiden outing at the Nurburgring in Germany last month, 25-year-old Welshman Morris secured a podium finish in race two with second position and is now determined to go one better with Balthasar at Misano, in what will be Morris’ first ever visit to the famous Italian track.

“I’m extremely looking forward to Misano, it’s going to be one of the busiest weeks of racing I’ve ever had with four races in total”, said Greenlight Sports Management racer Morris, “That’s something new and exciting, plus we have a lot of testing during the build-up so race week will actually be from Tuesday through to Sunday.

“Sebastian, my team-mate, has a lap record there and I’ve watched his onboard – he’s very quick around Misano so it’ll be great for me to learn the track from him to get up to speed, as I’ve never been there before. I’ll be surprised if we’re not challenging for podiums and wins.”

With a vast amount of experience in national and international GT racing, and a sparkling career in single-seaters before that, the Liberty Properties ambassador is a very highly regarded professional racer but he certainly doesn’t underestimate the challenge of the competition in Super Trofeo.

With the car being quite different to the GT3 version of the Lamborghini Huracan which Morris has also raced this year for Leipert in the 24H Series, the experience gained at the Nurburgring in September will be vital in his bid to become World Final champion just over a week from now.

“Considering the lack of time I had in the car prior to Nurburgring, and yet how well we did there coming second, we’re going out there to Misano on the hunt for wins”, Morris added, “I’m looking forward to it, and I’m very motivated. Hopefully we can bring home the World title!”