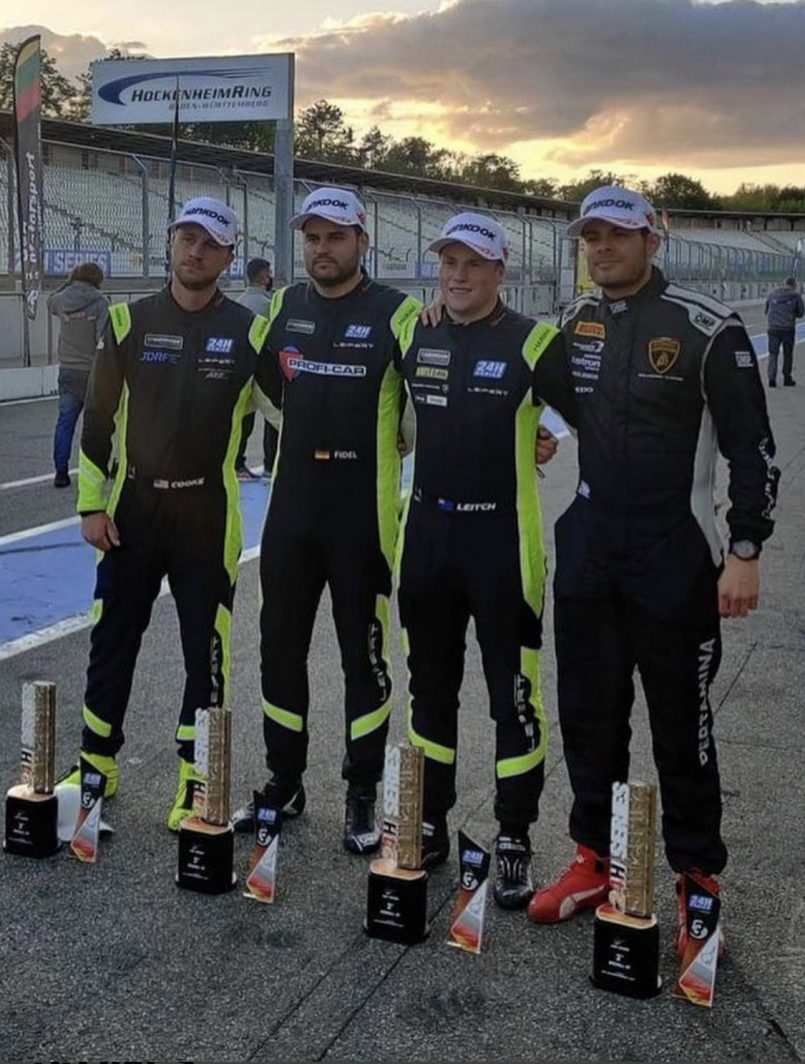 25 May Podium for Morris at Hockenheimring on 24h Series debut

Posted at 10:02h in Uncategorized by sarah

Lamborghini Huracan GT3 EVO driver Seb Morris celebrated a hard-earned podium finish on his debut appearance in the 24H Series at the Hockenheimring in Germany on Sunday, 23rd May, mere days after signing a three-event endurance deal with Leipert Motorsport.

Teaming with Brendon Leitch, Tyler Cooke and Fidel Leib, Welsh 25-year-old Morris delivered an excellent performance on his maiden weekend in the category during an action-packed and very dramatic Hankook 12H Hockenheimring – a race split into two segments over two days of action.

Morris was typically spectacular in qualifying on Saturday, 22nd May, going fastest on his first true flying lap and remaining in the battle for pole position throughout. Third with just a few minutes to go, he ventured back out for a final run to improve his time of 1m39.490 seconds (165.51 km/h) but the session was red flagged moments later and so he had to settle for third on the grid.

Leipert’s quartet went on to conclude the first six-and-a-half hours of action on Saturday in third place, having enjoyed spells of the race in the lead, and during Sunday’s concluding five-and-a-half hours of racing the team sealed a deserved podium during the final 10 minutes of action.

Morris was most pleased with the way the Pro-Am entry overcame the obstacles of heavier ballast than its rivals through the ‘Balance of Performance’ rulings and a smaller fuel capacity – meaning lost time through an extra pit-stop.

“I thought we’d do better in terms of the result, but when you take into account we had 30kg more ballast than anyone else, a much smaller restrictor on the car and 15 litres less fuel capacity, with a slower flow rate in refueling, the whole team can be very proud of the job we did”, said Greenlight Sports Management racer Morris.

“We also took a decision to give every driver a fair share of driving time, 25 percent each, which is why I didn’t drive on Sunday as I completed half the race on Saturday. The Lamborghini was perfect, the Leipert guys did an awesome job – we were racing Pro cars with a Pro-Am line-up. My pace was really strong, other than a small issue at the start everything else was perfect.”

Taking the opening stint of the race on Saturday, Chester-based Morris hit back quickly from a small problem at the rolling start which dropped him to seventh. Fighting back into fourth, running on used Hankook tyres, he was then baulked by a backmarker on lap 19 and so slipped to fifth position.

Pitting on lap 39, Morris handed over to Leitch with the Lamborghini then going onto fresh tyres and with fuel topped up. Lapping faster than the ‘amateur’ ranked drivers ahead at that point, the Kiwi was able to move through into the race lead before pitting on lap 92. Cooke embarked on his first running then, returning to the lead with two and a half hours to go, before Leib’s first run.

With just over an hour and a half left in Saturday’s segment of racing, Morris climbed back aboard the No.10 Lamborghini and lapped consistently quicker than his rivals. Producing some fantastic overtakes, he sliced through from sixth to second but had to pit in the final half hour for a short fuel stop – importantly, though, staying on the lead lap in third but having to conserve fuel.

With low fuel in the car, therefore, for the start of Sunday’s action only a handful of laps were able to be completed before Leitch – taking the opening stint – had to pit for a complete fuel stop and tyre change. Leitch pitted again from the lead at the 70-minute mark to hand over to Cooke.

Out of sequence with the pit-stops of the other front-runners, as they had been for most of the race, Cooke briefly took the lead before pitting to hand over to Leib with around two and a half hours of action to go. Maintaining the podium challenge, he handed over to Leitch for the last 90 minutes and after a final ‘splash and dash’ fuel stop late on he took the flag in third place.

“There really were some great battles out there and as we were so slow on the straights due to the BOP, I was having to work hard in the corners to make some good moves”, added Morris, “Actually, it’s the first time in probably a year or more I’ve been racing properly wheel-to-wheel, right in the mix with some mirror scraping action. I really did enjoy it, happy to come away with a podium.”

Morris’ second outing in the 24H Series with Leipert Motorsport will come at the Autodromo do Algarve, near Portimao in Portugal, over the weekend 17th/18th July – the Hankook 24H Portimao.