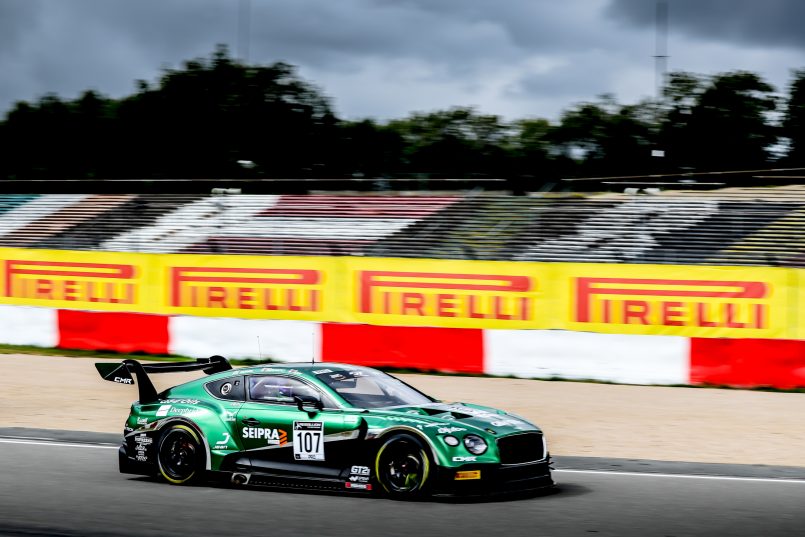 Posted at 21:03h in Uncategorized by sarah

Seb Morris heads to Paul Ricard in the south of France later this week for the final round of the GT World Challenge Europe Endurance Cup season, where the Bentley factory ace will be pushing as hard as ever to battle for a big result as his 2020 European campaign draws to a close.

Round four, the six-hour 1,000-kilometre Paul Ricard race, carries a lot of importance for the Welsh 24-year-old as the final encounter of his maiden season in Europe as a full ‘works’ driver. Additionally, it will be the 50th ‘Endurance Cup’ contest staged since the series was established back in 2011.

The Chester-based driver, who heads-up the No.107 Bentley Continental GT3 entry for French squad CMR, says the groundwork he has done ahead of the season finale on Sunday, 15th November, has been greater than ever and, along with team-mates Pierre Alexandre Jean and Nelson Panciatici, he is determined to fight for a top 10 finish in CMR’s home race.

“I’ve prepared like never before for Paul Ricard”, said Morris, who is represented by Greenlight Sports Management, “I’ve been up at M-Sport [Bentley technical partner] going through data, they won at Ricard last year and I’ve been working hard to ensure I can give CMR the best set-up possible.

“Personally, I did well at Ricard last season [with Team Parker Racing] and my stint times were very good and the pace was incredibly strong, so I’m really looking forward to being back there and hopefully ending the season on a high. To have finished the Spa 24 hours last month really was an achievement in itself, it shows the reliability we have at CMR which is very important.”

He added: “It’s a six-hour race at the weekend, and obviously the team’s home race, so we’re all aiming for a big finish to the season. One of the team’s strengths is the pit-stops, we’ve been gaining a lot of time there, so I think we could surprise a few people if we have a straightforward run.”

Due to the global COVID-19 pandemic, Morris’ maiden year as a fully professional driver has been a rollercoaster. Starting off with the M-Sport team for the Bathurst 12 Hours at the beginning of February, only a late-race puncture cost Morris, Oliver Jarvis and Alex Buncombe a dream podium.

Just weeks later, the world changed with the arrival of the coronavirus lockdowns and the start of the GT World Challenge Europe season was postponed. After turning his hand to sim racing with Bentley in the meantime, Morris’ real world racing resumed in July when the rescheduled European campaign began. Round two at the Nurburgring delivered a, thus-far, season best top 15 finish.

“This year has been a bit crazy to say the least, it’s been a massive learning curve and there have been a lot of different challenges”, he added, “It’s in the tough years where you learn more though, and you dig deeper. From a driving point of view, I feel I’m performing as well as ever so it really would be great to end the season with a strong result at Ricard.”