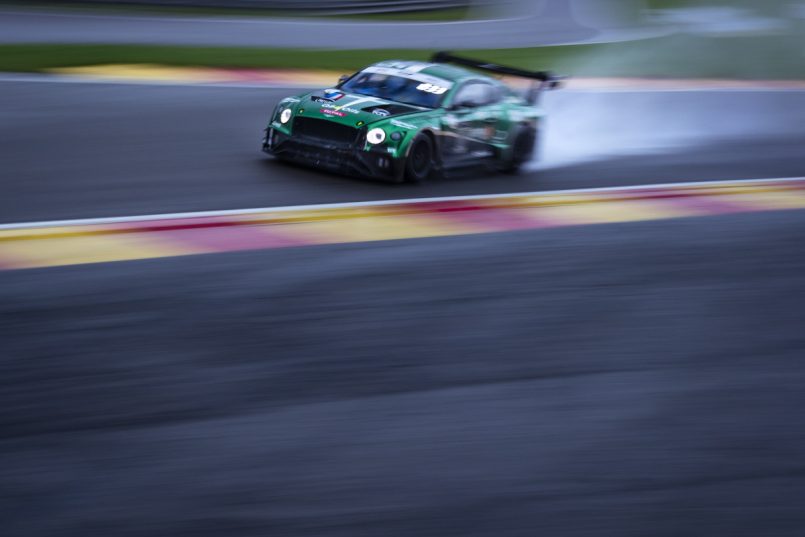 Posted at 08:46h in Uncategorized by sarah

•    Seb Morris happy with pace and 24hr race finish after early dramas
•    Bentley factory racer one of quickest drivers in wet at annual classic
•    Morris, Jean and Panciatici finish P33 despite losing over 50 laps
•    Great teamwork from CMR squad in true race of attrition in Belgium

Bentley Continental GT3 racer Seb Morris showcased his customary determination, tenacity and speed at Spa-Francorchamps in Belgium over the weekend, 24th/25th October, after mounting an impressive recovery with the CMR team during the rain-impacted Total 24 Hours of Spa.

Teaming with Pierre-Alexandre Jean and Nelson Panciatici in the CMR-run No.107 Bentley, Chester driver Morris battled back impressively from dramas in hour three of the race – which cost the squad around an hour in the pits – to post a 33rd place finish from 56 entries at the end of the 24 hours.

This year’s encounter, round three of the GT World Challenge Europe Endurance Cup, was very much a race of attrition but with tremendous teamwork and superb pace the CMR trio fought hard to the end on Sunday afternoon. Just to finish such a challenging race was a triumph in itself.

“Even though it wasn’t the result we wanted, I really enjoyed the whole race week at Spa”, said Welsh star Morris, “I’ve been working really hard with Bentley and the CMR guys to improve the car in the wet and it really has paid off, I was one of the fastest in the rain and this weekend was the first time this season we’ve had a real turn of pace with the car.

“It’s a measure of how much the team has moved forward since the start of the year, and being one of the few teams to complete the race is still an achievement in itself. It’s unfortunate we had an off in hour three, I was on the wrong tyres at that point as we needed wets, but we all fought very hard to the end. Pierre and Nelson did a fantastic job and CMR were very good with the pit-stops.”

Morris added: “I do want to say a massive congratulations to CMR for winning the ‘Am’ class with the sister car, and it’s fantastic to have been part of Bentley achieving a 100% finishing rate with all of its customer teams – the only manufacturer to do that. I’m very proud to have played my part.”

Preparations for the weekend didn’t get off to a smooth start when the No.107 CMR Bentley hit trouble early in free practice on Thursday, 22nd October. Missing pretty much the entire session, the trio headed into pre-qualifying on the back foot and in final qualifying later in the evening Morris, Jean and Panciatici had to settle for a frustrating 44th on the grid.

Panciatici started the race on Saturday afternoon and progressed well, running in 32nd place early in the second hour. Circulating as high as 20th position early in hour three, darkness soon arrived at Spa – as did plenty of rain. At the fourth pit-stop Morris climbed behind the wheel and was sent out on slick Pirellis, which soon proved to be the wrong tyre as conditions worsened.

Unfortunately making contact with the barriers due to the lack of grip available, the damage caused to the No.107 car meant a significant loss of time in the pits as the CMR squad worked feverishly to repair the Bentley. Jean joined the race in 53rd position and the team had a mountain to climb, but through the remainder of the contest all three drivers performed superbly to climb to 33rd place.

“Regardless of how the race turned out, the continued steps forward we’ve been making have been fantastic to see and I know we now have a car capable of strong performance in both the dry and wet”, said British Racing Drivers’ Club Superstar Morris, “I’m really looking forward to the final round in a few weeks, I’m determined to end the season in the points.”

Round four of the GT World Challenge Europe Endurance Cup, the final race of the rescheduled 2020 season, will take place over the weekend 14th/15th November at Paul Ricard in France.