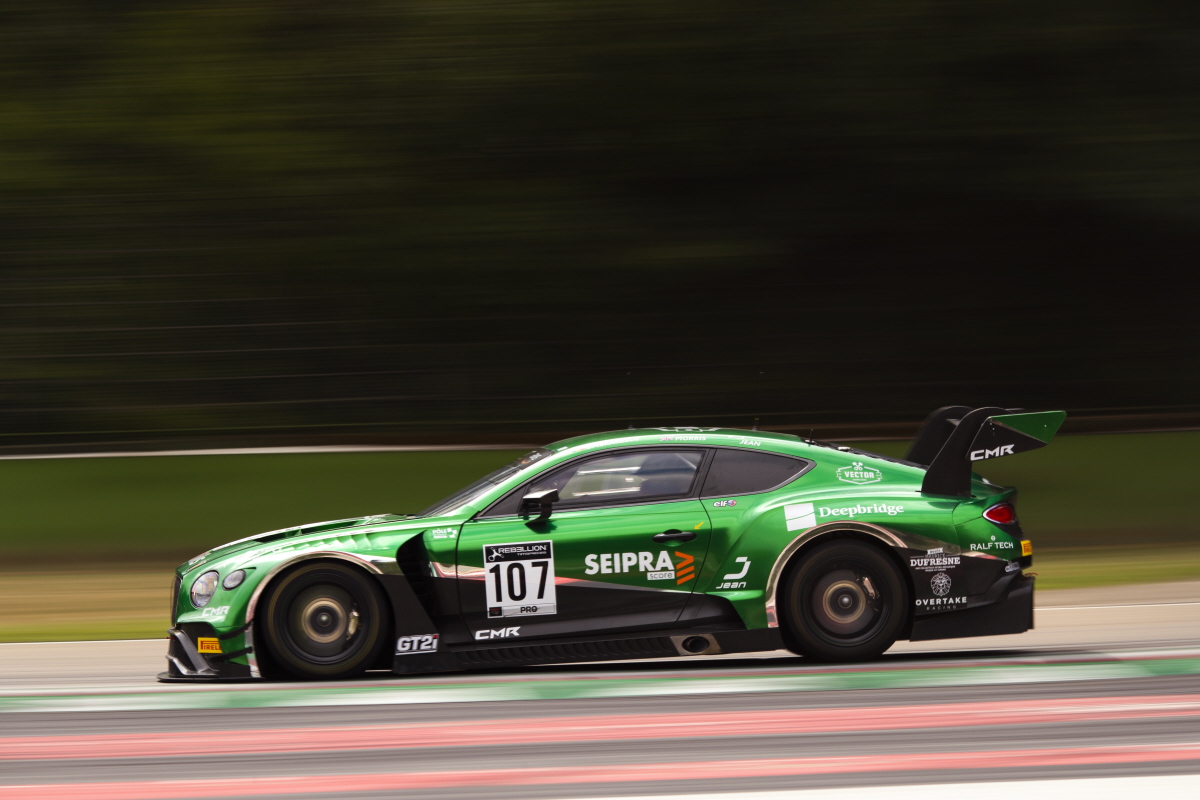 Posted at 11:10h in Uncategorized by sarah

Professional racing driver Seb Morris made his first appearance of the year with Bentley customer team CMR at Imola in Italy over the weekend, 25th/26th July, in his new role overseeing the French squad’s development during the GT World Challenge Europe Endurance Cup season.

Placed at CMR by Bentley for the outfit’s debut campaign in the globe’s biggest and most popular GT3 championship, 24-year-old Morris has not only been tasked with helping to develop the set-up of the No.107 Bentley Continental GT3 but also with driver coaching and mentoring duties.

Working to assist young French talent Pierre Alexandre Jean, who is part of the Bentley Motorsport Academy, Chester-based Morris was pleased with the big strides which CMR made over the course of the opening weekend of the season – even if the race itself didn’t go according to plan.

Just over 30 minutes into the three-hour encounter at Imola, with CMR’s third driver Razvan Petru Umbrarescu at the wheel, an unfortunate tangle with a rival car forced the Bentley off track and into the retaining wall, with the resulting damage leading to instant retirement.

Meaning Morris, of course, didn’t get to turn a wheel in the race itself, the Welshman was still satisfied with the developments he oversaw at the team during the course of the weekend and is now looking forward to a major test which is planned ahead of round two in September.

“It’s been great to be back at a race track for an actual race weekend after so long, even if the race didn’t turn out how any of us wanted!”, said the British Racing Drivers’ Club (BRDC) Superstar, “It’s fantastic to have been given the responsibility by Bentley to head-up the progress of CMR from Bentley’s side, and I’m really enjoying the role.

“It’s not just about being in control of the development of the car and the set-up for a brand new customer team, it’s about bringing the team as a whole forward and also mentoring and coaching the young drivers like Pierre Alexandre.”

Morris added: “My job isn’t just about driving now, it’s to help the young drivers come through and to provide as much value as I can with the input on the engineering side of things too. We made some big steps this weekend, pretty much from ground zero, and while the race didn’t go to plan for us we’ve all come away feeling positive for the big test ahead of the next round.”

Team-leader Morris unsurprisingly set the best time of the trio of team-mates in qualifying on Saturday, 25th July, but his run in the third session was compromised significantly. On average times of all three drivers, the No.107 car would begin Sunday’s race from 43rd position on the grid.

Romanian driver Umbrarescu took the opening stint of the three-hour encounter and made good progress over the first 30 minutes to climb into 36th place, prior to the unfortunate incident just after the half-hour mark.

Round two of the GT World Challenge Europe Endurance Cup season will take place over the weekend 5th/6th September at the Nurburgring in Germany.