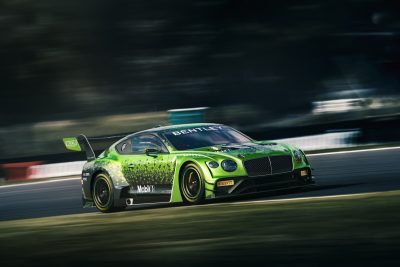 Posted at 11:48h in Uncategorized by sarah

Welsh 24-year-old Morris, who is embarking on the biggest and most high-profile season of his glittering motorsport career, has already arrived ‘down under’ in readiness for the start of track action for the Liqui-Moly Bathurst 12 Hours which gets underway on Friday, 31st January.

Following a total of five practice sessions, qualifying will then take place on Saturday, 1st February, with the big race itself – Morris’ first ever at Mount Panorama – starting at 05.45 (Australian time) on Sunday, 2nd February.

Joined in the thunderous M-Sport prepared No.8 Bentley Continental GT3 by fellow British drivers Alex Buncombe and Oliver Jarvis, Morris is determined to begin the new decade with a successful start to life as a factory driver with the legendary marque.

“This is where it all begins for me really as a fully professional driver”, said Morris, “I’m fitter than I ever have been and I’ve prepared for it as much as I possibly can, but apparently nothing can truly prepare you for Mount Panorama as it’s such a unique place. One of my main talents as a driver, though, is I get up to speed pretty quickly at new circuits, so that’s the aim this weekend.

“I’m itching to get in the car, see how I feel and the rest will then come. I know my job this weekend, I expect to be put in the car in the middle of the race as my more experienced team-mates do the start and finish – that’s what I presume will happen. I have to perform and do the job expected of me, so too the team with great pitstops and strategy as they always do.”

He added: “It’s a funny thing with M-Sport, I’ve worked with a lot of the engineers for years with the Bentley customer teams I’ve raced for. Throughout my four years associated with Bentley, I feel like I already know everyone in the team. I don’t feel I’m coming into a new team, I’m coming to Bathurst with a group of people I already know and work very well with, which is great.”

While in no way underestimating the challenge of the series or the immense 3.8-mile circuit, which has a 174-metre vertical difference between its lowest and highest points, British Racing Drivers’ Club ‘Superstar’ and Motorsport UK ‘Team UK’ driver Morris is confident for his first race of the year.

There is much to learn, but he has more than proven his abilities in and out of the car over the past four years. First in British GT, where he won the GT3 crown in 2017, and then in GT World Challenge Europe, formerly the Blancpain Endurance Cup, where he is a multiple podium finisher.

“Bathurst is a circuit like no other, the mountain section is pretty treacherous – there’s no room for error”, acknowledges Morris, “I’m going to be pushing pretty hard, pretty quickly and I want to make sure I’m on pace in the first and last sector and then build-up in the middle sector. I’m not coming here to be three or four tenths off, I’m coming here to be on race winning pace.

“We are somewhat underdogs in the No.8 car, but if you look at our line-up we’re hardly slouches. I genuinely think we can impress straight away. I’m not saying we’re going to win the race, but that’s not out of the question. I really do think we can shock a few people this weekend if all goes well.”

He continued: “It’s also very important for us all to consider what’s happening here in Australia with all of the bushfires and the devastation they have caused to the country’s people and wildlife. It’s an absolute tragedy, words can’t describe it, so it is wonderful to see the fundraising initiative Bentley has put in place.

“We collected three large bags of hand-crafted animal pouches from the Bentley HQ in Crewe, which have been made by crafters in Cheshire, and we’re going to deliver them on Monday to the Animal Rescue Craft Guild in Sydney. I’ll also be donating one of my crash helmets as well to help raise funds.”

After four practice sessions at Bathurst on Friday, 31th January, final practice will follow on Saturday, 1st February, with qualifying one set to begin at 12.40 (local time), qualifying two will start at 13.35 (local time) and the Top 10 Shootout will take place at 17.10 (local time).