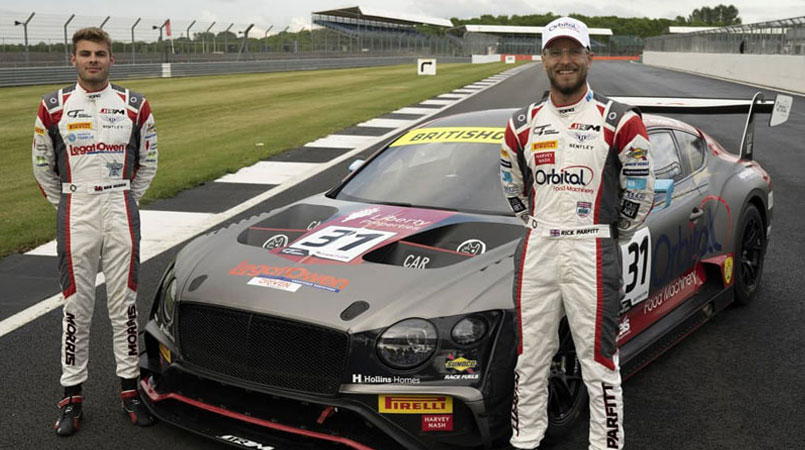 Posted at 16:41h in Uncategorized by sarah

Marking the 300th race to be contested in the history of the prestigious category, round nine of the campaign at the Leicestershire track’s full Grand Prix Circuit was packed with drama for the No.31 Bentley Continental GT3, as well as continued issues with an unfavourable Balance of Performance.

Running 60kg of ballast more than the team had at the beginning of the year, plus less turbo boost, the JRM Bentley was the slowest GT3 car through the speed traps and consistently between 3mph and 4mph down on the competition on the straights.

Despite all that, Chester racer Morris and Parfitt Jnr made the most of a superbly handling car to overcome an early excursion for the latter – after being fired off the circuit by the No.96 Aston Martin – and recover from 30th position at one stage into seventh place at the end of two hours.

“I really enjoyed the race, the car was brilliant in terms of the set-up and handling – the JRM guys did an amazing job”, said Welsh 23-year-old Morris, “Unfortunately, we were absolutely nowhere with the BOP again so I’m actually surprised how well we did. Every car just pulled away from us on the straights, so I had to make some proper moves on the brakes and get my elbows out a bit.

“Bentley has built a great car, JRM has done a fantastic job with the preparation and set-up and we just need some fairness with the BOP. I can’t understand why it’s been how it has, we don’t even need much to be in the fight. When you do your best with a great handling car and end qualifying over a second off pole it is disheartening, but we’ve just got on with the job.”

As has been the case all year in British GT, for the aforementioned reasons, qualifying didn’t deliver the sort of starting slot Morris and Parfitt Jnr wanted with the JRM duo having to settle for 11th on the grid for the season finale.

Racing proper didn’t begin straight away after two GT4 cars made contact on the initial formation lap, which ensured the Safety Car remained on track until the end of lap three. Holding 11th place, Parfitt Jnr set his sights on breaking into the top 10 as quickly as possible but a luckless excursion on lap six after contact from the No.96 Aston Martin dropped the Bentley down to 30th place overall.

Recovering in the middle of the GT4 order, Parfitt Jnr mounted a strong and sustained recovery and picked off numerous cars lap-by-lap to rise through into the top 12 as the first hour of action neared its conclusion. When the driver change pit-stops began to be served, Parfitt Jnr stayed on track and moved up into 11th before handing over the JRM machine to Morris with 57 minutes to go.

Joining the action in 12th place, the professional Bentley racer had a major task awaiting him with a 16 second gap to the Aston of Valentin Hasse-Clot. Setting the quickest first sector of anyone as he began his stint, Morris certainly declared his intent and was soon into the top 10.

Moving into ninth after problems for Jordan Witt’s Bentley, Morris closed to within almost eight seconds of Hasse-Clot prior to a Safety Car period with 35 minutes to go. When racing resumed with 22 minutes remaining, Morris got ever closer to the Aston and into the last quarter of an hour he passed Hasse-Clot for eighth.

With seven seconds to make up to the next car, and less than 10 minutes to go, any further gains looked very unlikely but Morris caught, and passed, Bradley Ellis’ Aston Martin on the final lap – the car which earlier made contact with Parfitt Jnr – even though the JRM machine was badly squeezed.

Completing a superb recovery from BRDC Superstar and Motorsport UK ‘Team UK’ driver Morris, his best lap of the race, 1m28.280 seconds, was just 0.4 seconds shy of the fastest of all to underline the tremendous performance.

“Our car on Sunday was one of the best cars I’ve ever had the pleasure to drive and Rick drove the best he has all season, he was the closest to me in qualifying he’s ever been”, added Morris, “JRM put together a brand new team for this year and they’ve done a superb job, I’m looking forward to hopefully being back with them next year – if they want me!”

With the British GT season now completed, Morris’ focus returns to his Blancpain Endurance Cup season where he will reunite with Team Parker Racing for the fifth and final round at the Circuit de Catalunya in Spain on Sunday, 29th September.