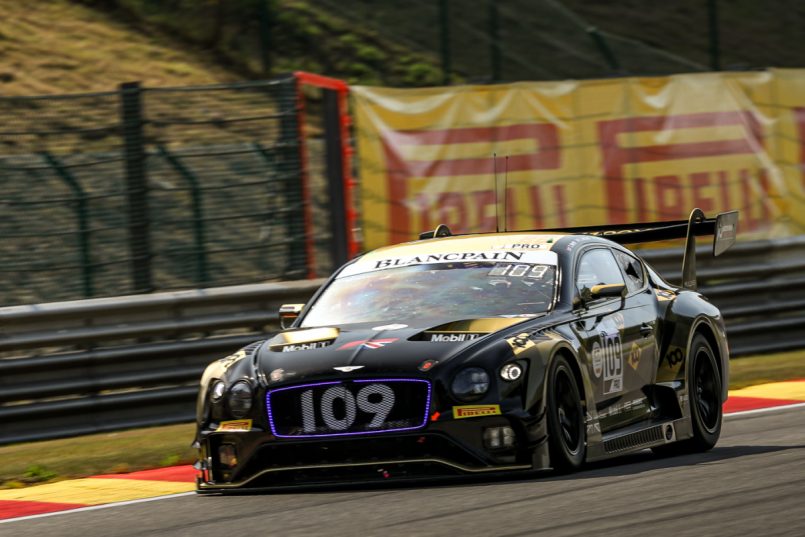 Posted at 12:08h in Uncategorized by sarah

Seb Morris embarked on his debut as an official ‘factory’ driver with prestigious manufacturer Bentley in the huge Total 24 Hours of Spa event over the weekend, 27th/28th July, to realise a lifelong dream…but hopes of success were mercilessly dashed just 20 minutes into the race.

Impressing in qualifying as the fourth fastest of the 16 works Bentley drivers taking part in the fourth round of the Blancpain Endurance Cup season at the Belgian track, Welsh ace Morris had very high hopes for a strong race in the No.109 car which was one of four Pro class entries from the marque.

On lap six though, only 20 minutes into the twice-round-the-clock encounter, team-mate Callum MacLeod radioed to the pits the car had a developing engine problem. Unbelievably, the issue was terminal and meant the Bentley had to be retired from the race – a crushing blow for all involved.

While understandably crestfallen with how the biggest weekend of his motorsport career came to an unexpected early conclusion before he had an opportunity to showcase his skills in the race itself, Morris is nonetheless very happy with his performance to that point and the input given to Bentley.

“My personal performance was great this weekend”, said the Chester-based 23-year-old, “I qualified fourth fastest of the 16 Bentley drivers, which I was pretty happy with, and it was obviously a dream come true to be part of the official Bentley factory entry for the biggest GT3 race in the world.

“Throughout the week my role was to interact with the team, work closely with the engineers and to prove what I can do off-track as well as on-track. It was important to show my professionalism and to give strong feedback, proving my value to the team, so, in that respect, it was a great week.”

Morris added: “It’s just such a huge shame we didn’t have the opportunity to deliver in the race as Rodrigo [Baptista], Callum and I worked very well together and we had the pace to push for a strong result. We’re all beyond disappointed, just serious bad luck unfortunately, but the past week has been an amazing opportunity for which I’m incredibly grateful to everyone at Bentley and M-Sport.”

Preparations for the Total 24 Hours of Spa started at the beginning of last week, including the parade of drivers and cars into Spa town centre on Wednesday, 24th July, to meet and greet local fans, but the first track time for the Bentley trio came on Thursday, 25th July.

Progressing well with a lot of set-up work completed in free practice and pre-qualifying, during final qualifying Baptista was 36th overall in his session with a time of 2m21.559 seconds and MacLeod was then 30th fastest in 2m20.718 seconds during session two.

Morris was charged with the last run where he was the fastest of the three team-mates, setting a best lap of 2m20.624 seconds which was, notably, the fourth best lap of the 16 professional drivers entered in the race by Bentley.

Combining their respective efforts, the No.109 car concluded qualifying with the 36th best time overall from the 70-plus entry with an average time of 2m20.967 seconds, within just half a second of the lead No.107 Bentley piloted by Jules Gounon, Steven Kane and Jordan Pepper.

Of course, the race – which got underway behind the Safety Car at 16.30 local time on Saturday due to the arrival of rain – promised much for Morris, Baptista and MacLeod but the enforced retirement prevented the trio from showcasing their undoubted potential.

Now, BRDC Superstar and Motorsport UK ‘Team UK’ racer Morris heads into the penultimate round of the British GT Championship at Brands Hatch Grand Prix Circuit in Kent where he and team-mate Rick Parfitt Jnr are aiming for a long overdue podium return with the JRM customer Bentley squad.

Going into the race meeting ninth in the outright GT3 standings and also ninth in the Pro-Am title battle, the former British GT Champions are owed a major turnaround in fortunes after a challenging season to date and Morris says he will be pushing as hard as ever to make it happen.

“We’ll have a reset this week before we go to Brands, look at a different plan of attack with the guys at JRM as there is a lot of potential within the team which we still need to unlock”, commented Morris, “I’m working to use my experience of winning the championship before with Team Parker to try and make some positive steps forward. I’m very keen to end this British GT season on a high!”

Following practice and qualifying on Saturday, 3rd August, round eight of the British GT season – a two hour race – will get underway at 13.00 on Sunday, 4th August.