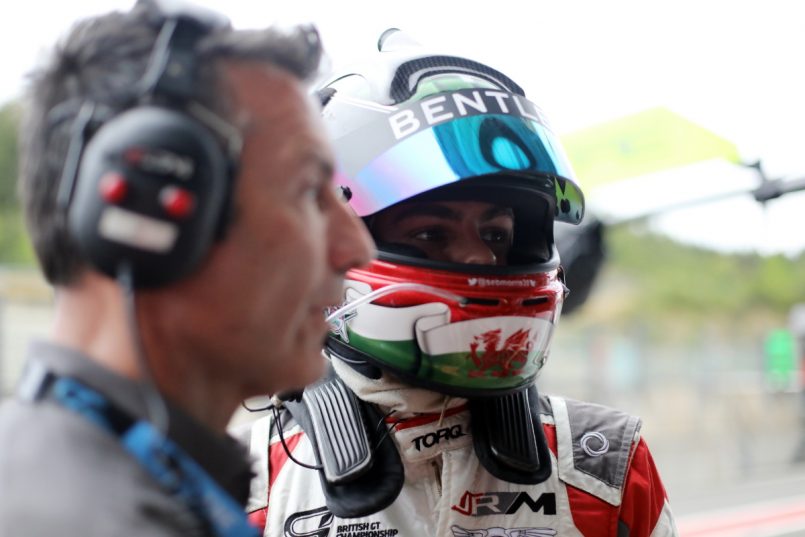 Posted at 11:47h in Uncategorized by sarah

Seb Morris experienced a continuation of the misfortune which has unfairly hampered his 2019 British GT Championship challenge during round seven of the season at Spa-Francorchamps on Sunday, 21st July, when two luckless penalties and a tyre blow-out ruined any hopes of a podium.

With JRM team-mate Rick Parfitt Jnr having to serve a stop/go penalty early in the 120-minute race, following contact with one of the Lamborghinis, a second penalty had to be served during hour two after officials deemed the mid-race pit-stop to have been fractionally too short.

Incredibly, a puncture with around 20 minutes to run added real insult to injury and necessitated a third unscheduled stop. Chester-based driver Morris eventually went on to take the chequered flag in an exasperating 12th position, 10th in the Pro-Am class.

“We qualified out of place and everything went wrong from there really”, said the BRDC Superstar and Motorsport UK ‘Team UK’ driver, “Rick got into a tangle on the first lap, which gave us the first penalty, and then we were a fraction of a second too fast in the pit-stop. When I had the blow-out, it just rubbed salt in the wound.

“In terms of my performance I was happy, after all of the penalties and issues there was no chance of a result so I just used the race as a test session really ahead of the 24 hour race next weekend. I can’t wait for that, racing as a factory driver with Bentley is the biggest opportunity of my career so far. From the point of view of British GT, though, I just hope we can have some better luck soon.”

Qualifying on Saturday, 20th July, was impacted by some typical Ardennes weather with heavy rainfall prior to the start of the first session meaning a fully-wet track awaited Parfitt Jnr. Lapping well in the challenging conditions, he ended the run with the third fastest time overall.

Session two, however, didn’t go to plan for Morris – GT3 lap record holder at Spa – and in a less than straightforward run he had to settle for the 11th best time. On combined times from the two sessions, the No.31 JRM Bentley lined-up eighth on the grid for Sunday’s afternoon’s two-hour race.

At the rolling start, which was relatively confusing when the green lights were displayed very late, Parfitt Jnr was edged to ninth but into Les Combes he was right with Sam De Haan’s Lamborghini. At the exit of the right-left sequence, though, slight contact between the pair led to a spin for De Haan and meant the JRM Bentley dropped to 10th place.

Determined to recover the lost ground as quickly as possible, Parfitt Jnr was into seventh place by the start of lap four and he then closed up behind the McLaren of Shaun Balfe and Michael Igoe’s Lamborghini. On lap seven, with the trio all very close together, as Balfe challenged Igoe though Eau Rouge Parfitt Jnr read the situation beautifully and passed both to take fifth place.

Frustratingly, though, the Bentley was then given a 10 second stop/go penalty due to the lap one incident with De Haan and Parfitt Jnr headed for pitlane at the end of lap seven. Rejoining in 10th position, some 16 seconds adrift of the next car with 25 minutes of racing elapsed, the Bentley was on track just ahead of the De Haan car which loomed large in Parfitt Jnr’s mirrors.

While the Bentley closed down the gap to the cars ahead, De Haan remained in close quarters and on lap 17 the Lamborghini edged Parfitt Jnr back to 11th place. Moving back up into the top 10 as the end of the first hour neared, when the driver change pit stops began to be served Parfitt Jnr stayed on track and moved into second before handing over to Morris with 55 minutes to go.

When the race order had settled Morris was in ninth position and with a huge challenge on his hands to try and salvage a stronger result. Running five seconds adrift of the battling trio ahead, the Welshman circulated faster than all three rivals and started to chip away at the gap.

Incredibly, though, Morris’ charge was halted almost as soon as it had begun when officials declared the pit-stop had been fractionally too short. Forced to serve another stop/go penalty, the JRM driver did so with 43 minutes remaining on the clock and threaded back into the race in 11th spot.

With no likely prospect of achieving a top 10 finish thereafter, with just over 20 minutes to run the unthinkable happened when the Bentley sustained a right-rear blow-out. After pitting for a fresh Pirelli tyre, Morris re-joined in 12th position where he remained to the conclusion – 10th in Pro-Am.

Brands Hatch Grand Prix Circuit in Kent will host the penultimate round of the British GT season two weeks from now on Sunday, 4th August. In the meantime, Morris will remain at Spa-Francorchamps for the fourth round of the Blancpain Endurance Cup – the prestigious Total 24 Hours of Spa.

Marking his maiden race as an official ‘works’ driver for Bentley, the Welshman joins the M-Sport team to partner Rodrigo Baptista and Callum MacLeod in the No.109 Bentley Continental GT3. The race will begin at 16.30 (local time) next Saturday, 27th July.