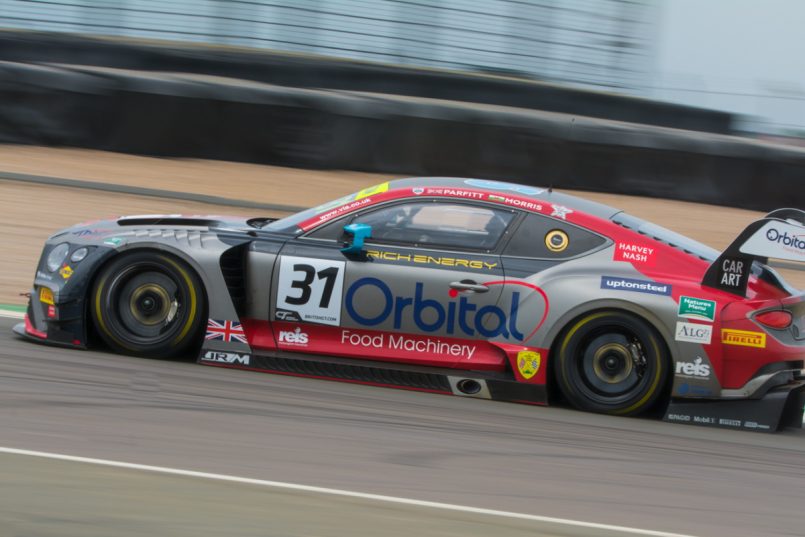 Posted at 13:30h in Uncategorized by sarah

Bentley Continental GT3 team-mates Seb Morris and Rick Parfitt Jnr experienced a continuation of their 2019 frustrations during round six of the British GT Championship season at Donington Park on Sunday, 23rd June, with a seventh place finish the best the duo could muster in the circumstances.

With an unfavourable ‘Balance of Performance’ ruling for their JRM-run car hampering hopes of challenging the front-running Aston Martins and Lamborghinis, Chester-based Morris and Parfitt Jnr still did everything possible to deliver a wholly professional showing in the two-hour encounter.

“We were hampered from the moment we got to the track unfortunately”, reflected 23-year-old former British GT Champion Morris, “It was one of those horrible feelings – the car JRM gave us felt really good and handled well in the first two sectors, but we just had no speed.

“We were down in all the speed traps and anything we could do in the first two sectors, we lost it all in the third sector. Qualifying was hard work and the race was tough, it’s frustrating as everyone is working very hard but we’ve been held back by a bad BOP.”

Qualifying on Saturday, 22nd June, set the scene for the weekend really with Parfitt Jnr lapping ninth fastest in the ‘Am’ run – a time of 1m28.530 seconds – before Welshman Morris was eighth quickest in the subsequent ‘Pro’ session with a lap of 1m27.371 seconds. The combined average of their best times resulted in a fifth row start for the race.

Parfitt Jnr took the first stint of the 120-minute encounter from 10th on the GT3 grid and at the rolling start he moved up into ninth and tried to challenge for eighth at Redgate, before tucking back in as the 40-car field thundered down the Craner Curves.

Moving up into eighth on lap two, Parfitt Jnr then slipped to ninth a lap later as the Mercedes-AMG of Richard Neary went through. Despite losing a chunk of time in the process, he was able to then climb into seventh on lap five when a couple of rivals tangled.

Parfitt Jnr then closed up behind the Aston of Andrew Howard and sought a way past, which he succeeded in doing on lap nine to claim sixth. Working to close down the six second gap to the cars ahead, by lap 15 he had almost halved the deficit but through traffic the difference increased.

Holding sixth to the driver-change pit stop at the halfway point of the race, Parfitt Jnr handed over the No.31 Bentley to Morris just after the one-hour mark. The BRDC Superstar and Motorsport UK ‘Team UK’ driver joined the track in eighth position, with two GT3 cars yet to stop, although a fire related issue with the No.96 Aston Martin in the pits elevated the Bentley into seventh place.

Onto his first flying lap Morris held seventh, before then climbing into sixth ahead of the No.72 Lamborghini which pitted after the JRM entry. Sixth then became fifth, at the expense of the No.2 Aston Martin of Mark Farmer which also pitted a couple of laps after the Bentley.

With 50 minutes to go and the order having settled following the mandatory driver changes, Morris was fifth and just under 10 seconds adrift of his next target, Dennis Lind’s Lamborghini Huracan, but the Welshman also had Phil Keen’s Huracan right behind and pressuring heavily.

Pushing as hard as possible, despite giving away significant speed to the Lamborghinis, Morris was eventually passed by Keen and he then fell into the clutches of the next challenger. Driving inch-perfect lines, and trying to make the Bentley as wide as possible, Morris continued in sixth but with 20 minutes to go he was edged back to seventh position where the JRM car stayed to the conclusion.

British GT now heads into a four week break ahead of round seven of the season, the annual overseas race at Spa-Francorchamps, which will take place on Sunday, 21st July. Kicking off a very important week in Belgium for Morris, just days later he will make his first ever race appearance as an official Bentley ‘works’ driver during the Total 24 Hours of Spa on 27th/28th July.