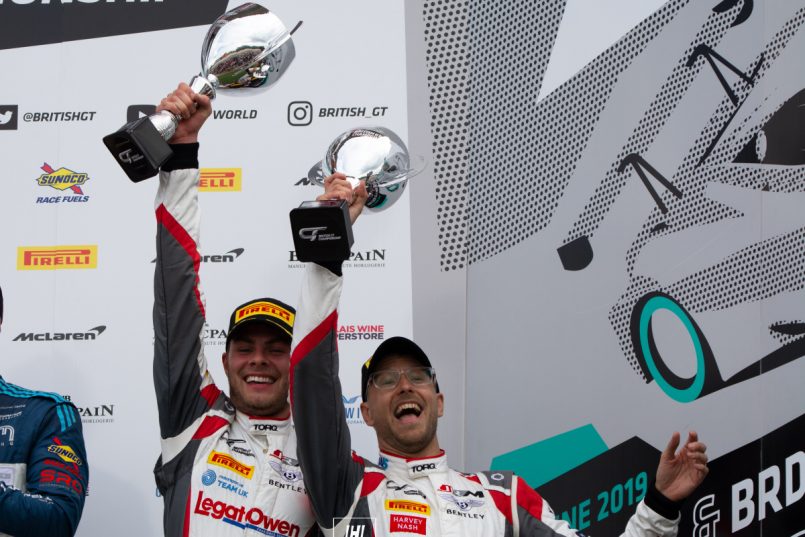 Lightning quick British GT Championship racer Seb Morris produced an absolutely sensational performance during round five of the season at Silverstone Grand Prix Circuit on Sunday, 9th June, with a superb charge to the podium – before his JRM-run car was disqualified from the results.

Immediately invoking an appeal against the decision, where championship officials said the team’s Bentley Continental GT3 was underweight without fuel onboard, JRM and drivers Morris and Rick Parfitt Jnr are now awaiting the outcome which will have a huge bearing on their 2019 title bid.

Chester-based Morris and team-mate Parfitt Jnr did the unthinkable in the race, overcoming a tough qualifying session to rise through from 11th on the grid and also overturning a frustrating mid-race penalty, linked to pit-stop procedure, to scythe through to the podium in third place.

Morris took the chequered flag at the end of three hours of intense action just 0.6 seconds shy of the runner-up position, and also with the fastest lap of the race with a time of 2m02.014 seconds, but post-race scrutineering then delivered the hammer blow of disqualification.

Reflecting on the decision, Morris commented: “We’re all unbelievably disappointed and JRM immediately lodged an appeal so we’re waiting to see what the outcome of that will be. In terms of the race performance, I was very happy with my pace and to come through from a tough qualifying and a mid-race penalty to take third was a fantastic effort.”

JRM Technical Director Elliot Dason-Barber added: “We have not breached any regulations intentionally and we’ll be putting our case together for the appeal and are hopeful that the decision will be fair. The cause of the disqualification didn’t affect the performance of the car so we can be incredibly proud of the team to start 11th on the grid, crossing the line P3 and getting fastest lap too.”

While starting the flagship Silverstone 500 from 11th on the grid wasn’t part of the plan, the No.31 Bentley starred in the race itself and Parfitt Jnr made good progress during the opening stint to climb up into the top five after half an hour of running.

Pitting to hand over the car to Morris with 42 minutes elapsed, the BRDC Superstar and Motorsport UK ‘Team UK’ driver instantly lit up the timing screens as soon as he joined the track and pumped in a fastest lap of 2m02.480 seconds on lap 21.

When the first round of pit-stops shook out, Morris was sixth at the 60-minute mark and he produced some sensational overtaking to move through into the top four within just over 10 seconds of the podium placings. As the gap fluctuated through GT4 class traffic, Morris pitted just after the halfway point of the race from fourth to hand the Bentley back to Parfitt Jnr.

Shortly after Parfitt Jnr rejoined the action, though, officials declared the JRM car had to serve a drive-through penalty following a perceived infringement of pit-stop procedure. Dropping from fourth to seventh in the process, and losing significant time, Parfitt Jnr was able to move back into the top four again before handing back to Morris for the run to the chequered flag.

With just under 50 minutes remaining, the 23-year-old again delivered searing pace and set the fastest lap of the race with a time of 2m02.014 seconds on lap 62. During a remarkable final stint, the Welsh star carved his way into the podium placings with 25 minutes to go.

Although edged back to fourth into the final 10 minutes by the Aston Martin of Nicki Thiim, drama followed with just a couple of minutes on the clock when the race-leading Aston of Jonny Adam was involved in a tangle with a GT4 car being lapped. As a result, Morris was able to slice through into third and after closing back in on Thiim’s car only 0.6 seconds split them at the flag.

While JRM now awaits the outcome of the Silverstone 500 appeal, the next race of the British GT season is just a fortnight away with round six taking place at Donington Park Grand Prix Circuit in Leicestershire on Sunday, 23rd June – the first of two visits this year to the East Midlands track.