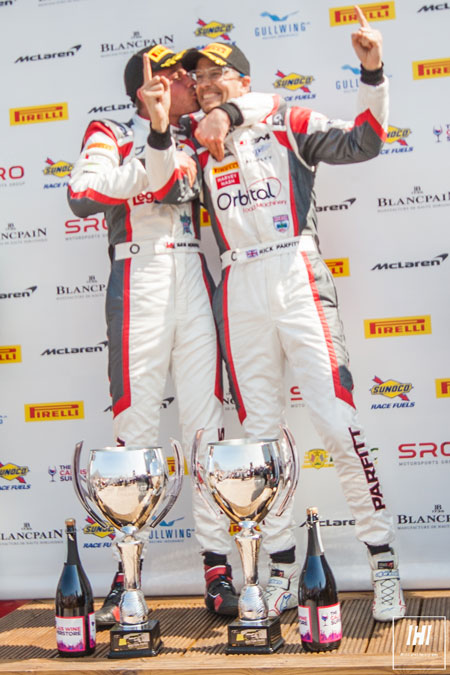 British GT Championship returnee Seb Morris made a tremendous start to the 2019 season at a bright and sunny Oulton Park International Circuit on Easter Monday, 22nd April, with a fantastic opening round victory on his maiden race outing with new Bentley Continental team JRM.

“I was really happy with race one and the whole weekend to be honest”, said elated BRDC Superstar and Motorsport UK ‘Team UK’ driver Morris, “In qualifying we were given a slow BOP [Balance of Performance], so we thought it would be a tough weekend, but the race went better than we could’ve dreamt – it’s amazing to have won our first race with JRM who did an incredible job.”

In round two later in the afternoon, the 23-year-old Welshman and his team-mate unfortunately rued what might have been when a late race excursion for Parfitt Jnr – while running fifth – meant an eventual finish of ninth in GT3 and eighth in the Pro-Am class.

“At the end of the day Rick just made a small mistake in race two, it was unfortunate but we still came away with points”, added Morris, “If you’d have said to me at the beginning of the weekend we’d have a win and an eighth in Pro-Am, I’d have bitten your arm off. With how strong we’ve been this weekend, I’m really looking forward to the next round.”

Championship bid begins strongly for Morris, Parfitt Jnr and JRM
Under bright and sunny skies for race one, Pariftt Jnr took the opening stint from fourth on the grid and maintained position through the first corner off the rolling start before then taking third place from the Lamborghini of Sam De Haan on the run out of Cascades.

Then, on lap two, a dramatic incident at Hislop’s Chicane, when second placed Ryan Ratcliffe collided with the lead Mercedes of Ian Loggie, enabled Parfitt Jnr to slice past into the lead of the race before officials then deployed the Safety Car to enable recovery of the stricken cars.

Racing resumed on lap seven and Parfitt Jnr did a good job to lead by 0.7 seconds over the line, before then proceeding to pump in a series of fastest laps. Scorching away from the pack, by the time the pit stop window opened the JRM driver was almost 10 seconds clear.

Staying on track until the end of lap 13, he then pitted to hand the Bentley over to Morris with 35 minutes of the race to run. Getting out onto track firmly in the lead of the race, the early part of the Welshman’s stint wasn’t without drama with a number of GT4 class cars proving a hinderance – an errant Ford Mustang even making contact with the Bentley at one stage at Druids.

Threading his way through the traffic professionally and quickly, Morris held an advantage of over seven seconds from the Lamborghini of Phil Keen as the race reached the halfway point but the Huracan driver – on new tyres – did then begin to take time out of the leader.

Pushing as hard as possible, Morris continued to pick up his own pace and with 20 laps completed the gap stabilised at around six seconds. Through lapped traffic the lead did fluctuate, but Morris made no mistakes and into the final 10 minutes he’d opened the lead back up to eight seconds. Over the last few laps things did close up through more traffic, but Morris had it all under control to win.

Round two later in the day started with Morris behind the wheel of the No.31 Bentley for the first stint and after holding his starting place of fourth through Old Hall, he then climbed into third at Cascades as he eyed another podium finish.

Following the deployment of the Safety Car in time for lap three, racing resumed on the seventh tour and Morris started to pile significant pressure onto the Mercedes of Adam Christodoulou. Swarming all over his rival, the JRM driver was relentless in attempting to find a way past and into lap 14 he was just 0.275 seconds behind.

Choosing to make an earlier pit-stop than would otherwise have been the case, to try and mitigate the time being lost and also bearing in mind the 10 second ‘success’ penalty from race one which meant the Bentley had to remain in the pits longer than rival cars, Morris handed over to Parfitt Jnr at the end of lap 15.

When the race order settled after all stops had been completed, Parfitt Jnr held seventh position but a moment for one of the Aston Martins soon after enabled him to climb into sixth. With the incident triggering another Safety Car period, racing resumed on lap 23 with just 15 minutes to go and Parfitt Jnr immediately looked to challenge Andrew Howard.

Producing a superb cut-back at Lodge at the end of the lap to grab fifth from the Aston Martin driver, Pariftt Jnr’s next target was the Lamborghini of Adam Balon but a dramatic excursion at Brittens Chicane pitched the Bentley into the barriers. Although the car did eventually fire back up, Parfitt Jnr dropped down the order and ultimately ended the race ninth in GT3 and eighth in Pro-Am.

Rounds three and four of the British GT season will take place over the weekend 18th/19th May at Snetterton 300 Circuit in Norfolk. One week earlier, Morris will return to action in the Blancpain Endurance Cup for round two of its season on Sunday, 12th May, at Silverstone Grand Prix Circuit.