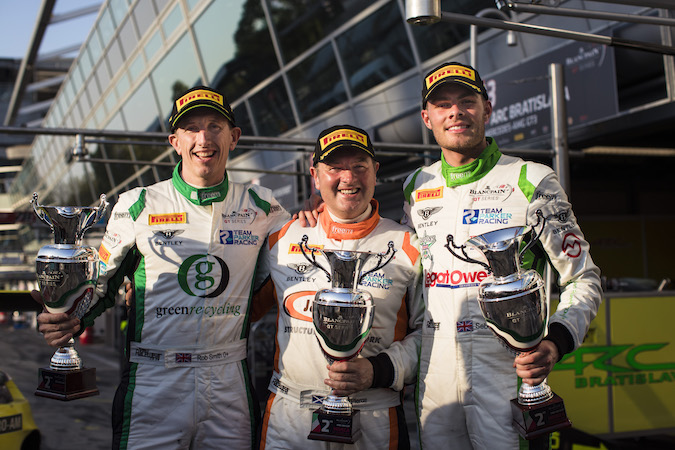 Blancpain Endurance Cup debutant Seb Morris produced a remarkable performance during the opening event of the 2018 season at Monza in Italy on Sunday, 22nd April, with a fabulous second place finish in the Pro-Am class for Team Parker Racing.

The 22-year-old Welshman, who is part of the prestigious British Racing Drivers’ Club ‘Superstar’ programme and MSA Team UK, was on sensational form from the outset at the Italian venue at the wheel of the No.31 Bentley Continental GT3.

Scorching to the fourth fastest time overall in qualifying, second in Pro-Am, the reigning British GT Champion turned heads again during Sunday afternoon’s three-hour contest where he delivered a masterclass in overtaking in the final stint of the race on his way to second place in Pro-Am.

Partnered by fellow British drivers Derek Pierce and Rob Smith, who both performed extremely well during the first and second hours respectively, Chester-based Morris is now incredibly excited ahead of the championship’s visit to UK soil next month for round two at Silverstone Grand Prix Circuit.

“I’m really happy, we had a mega start and Derek drove a really good stint to get from fifth up to first”, said Morris, “Unfortunately, we lost time in the pit-stop due to a radio problem, but we pushed as hard as we could and Rob did a flying stint in the second hour. When I jumped in, I had a really strong stint and we kept the tyres with us the whole way.

“I pulled off some great overtaking, both for position in class and position overall, and it was just a really good, fun race – I think I showed what I can do on the European stage. The leading Ferrari just got too far ahead from us, but at a lot of points during the race we were the fastest car on track so I’m really happy with that.”

He added: “I’ve always said I could compete at this level with the right opportunity, it’s so nice to do that and prove that in my first race in Blancpain which is arguably the biggest GT championship in the world.”

Pierce took the first of the qualifying sessions on Sunday morning and posted the ninth best time in Pro-Am while Smith was fourth in class in session two. Morris piloted the Bentley in the third and final session, where the fastest ‘Pro’ drivers took part, and produced a sublime performance.

Starring with a lap of 1m48.083 seconds to post the second quickest time in Pro-Am, he was also an exceptional fourth overall – just 0.2 seconds shy of the outright pace. As the fastest Bentley entry, Morris was also mere hundredths of a second shy of Pro-Am pace-setter, multiple Formula One Grand Prix winner, Giancarlo Fisichella.

So, taking the combined average times of all three Team Parker drivers, the No.31 car began round one from fourth in Pro-Am and Pierce started the race. Although edged to fifth at the beginning, he quickly hit back and 15 minutes into the race he was inside the top three. Five minutes later, Pierce was in the lead of Pro-Am and he went on to control the class until the first pit-stop.

With the aforementioned radio problem costing some valuable time in the pits, when Smith climbed aboard the Bentley he entered the race in fifth position in Pro-Am but, like Pierce, made up good ground and during the second hour he moved up into fourth place before handing over to Morris.

On track with the quickest drivers in the championship during the final hour, including many ‘factory’ racers and vastly experienced international professionals, the Welshman absolutely starred. Holding sixth place initially, he quickly moved back into the top four and produced a memorable pass on the newer generation No.7 M-Sport Bentley Continental at the Parabolica for an overall position gain.

Running 2.5 seconds shy of the class podium placings, Morris reeled in the target AF Corse Ferrari and grabbed third place with just over half an hour to go. Closing down the next gap to the similar Kessel Racing Ferrari, Morris took second place with 25 minutes remaining where he stayed.

Despite lapping faster than the Pro-Am leading Rinaldi Racing Ferrari, the gap was too big to surmount during the time remaining. Second place, though, marked a sensational beginning to life on the European GT stage for the talented endurance racer.

“It’s been a fantastic start in Blancpain and this result has only added to our confidence”, he added, “Silverstone next is a good track for us, we were strong there in testing and I obviously won there by a minute and a half in British GT last year, so we’ll go there aiming for another strong weekend.”

Round two of the Blancpain Endurance Cup will take place at Silverstone Grand Prix Circuit in the UK over the weekend 19th/20th May.