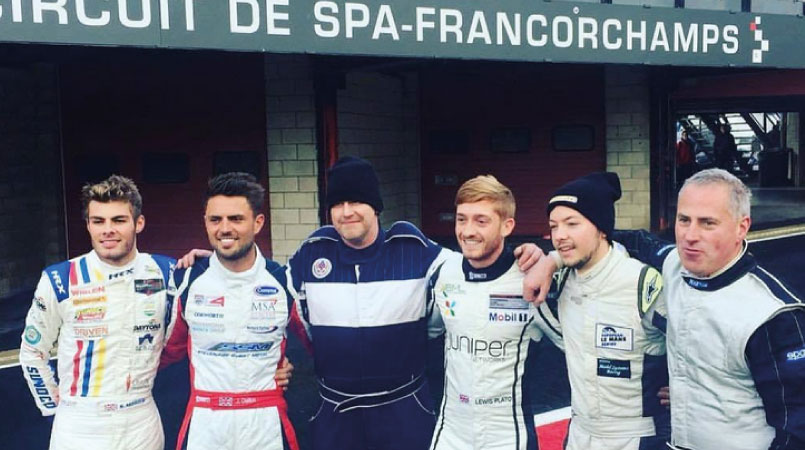 British GT Champion Seb Morris swapped the brute force of GT3 power for something very different at Spa-Francorchamps over the weekend, 21st/22nd October, as part of the ‘Daltonator’ Citroen C1 squad which claimed a dominant victory in a fun-filled 24 Hour race.

Invited to join Richard Dalton’s Cheshire team for the encounter at the Belgian track alongside Dalton himself, his son Jake, Lewis Plato and James Fletcher, Chester-based Morris produced a typically faultless performance as they won by an incredible three laps.

Beginning the event as they meant to go on, Morris and Jake Dalton took driving duties for the two qualifying sessions with the latter fastest in the first outing and BRDC Superstar and MSA Team UK driver Morris quickest in his run.

Beginning the race in class pole position, Fletcher took the opening stint on Saturday afternoon and handed the C1 over to Plato before Welshman Morris had his first race mileage in the car at around 22.00 on Saturday night.

While the first 12 hours of the race were dry, the second half of the encounter was affected by rain which brought an altogether different challenge for the competitors and the Citroen C1. Morris climbed back behind the wheel at 02.30 on Sunday morning and during his stint he managed to lap the entire field with some incredible overtaking on a wet track in pitch-black conditions.

As the race neared it conclusion on Sunday afternoon, Dalton Snr took the final stint and brought the car home safely to take the chequered flag three laps clear for a magnificent victory – certainly one of the most unexpected successes of Morris’ career!

“We all went to Spa to have some fun with the Citroen but determined to do the best we could as well, so it’s fantastic to have won the race by three laps”, reflected Morris, “I missed the test they did at Donington due to other commitments, so I went to Spa having never driven the car before but it didn’t take any time to adjust to the driving style needed.

“The C1 is certainly radically different to the other cars I’ve raced this year, the Bentley [in British GT], the Lamborghini [in the International GT Open], the BMW in VLN and the Cadillac prototype at the start of the year at Daytona, but it was a lot of fun and the atmosphere was great all weekend!”

Having always wanted to contest a 24 hour race, Dalton Snr decided to convert a road-going Citroen C1 to race specification solely for the purpose of the weekend’s event at Spa and Morris had nothing but praise for his team-mates and the preparation Dalton’s squad put in place.

“The car was great and ran like clockwork, the pit-stops were perfect and the whole team did a fantastic job”, added Morris, “Richard and his boys at the garage spent a lot of late nights stripping out the C1 they bought to prepare it for racing. The car still had the radio in it, so when we had a Code 60 [cautionary period] in the race I switched it on which was pretty funny!

“While the race is mainly about having some fun, there was some serious competition out there with drivers from the BTCC [British Touring Car Championship] and categories like that. It was a great event to be part of, probably the most enjoyable race of my career, and I’d like to thank Richard and Jake for asking me to be part of the team.”