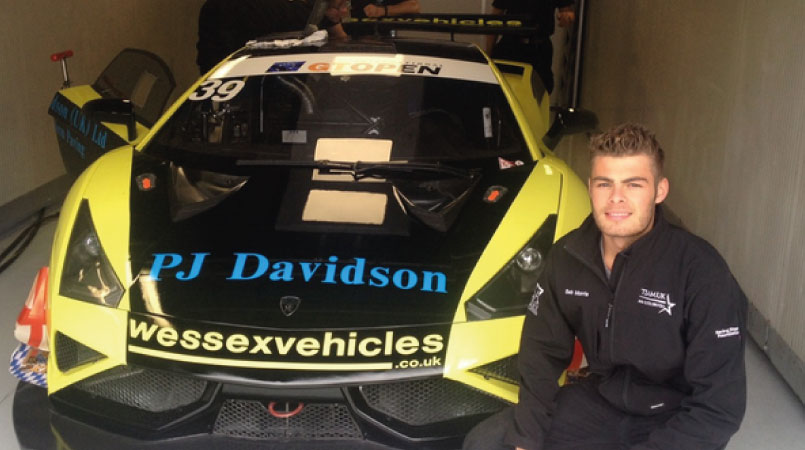 Only a couple of days since wrapping-up a magnificent British GT Championship title victory at Donington Park this past Sunday, Seb Morris has now been invited to take part in the penultimate event of the pan-European International GT Open this coming weekend at Italian track Monza.

Welsh 21-year-old Morris, who is rapidly carving out a name for himself in top-line GT endurance racing in only his second year in the discipline, has been drafted in to partner fellow Briton Craig Dolby at the Wessex Vehicles team in rounds 11 and 12 of the International GT Open.

Sharing a Lamborghini Gallardo GT3 in the Pro class, the team-mates will form part of an expected entry of 26 cars and the focus is, very much, on challenging for class and outright honours during the weekend’s two encounters – one 70 minutes in duration, the other a shade over an hour.

While having had precious little time to celebrate his outstanding British GT success, achieved with Bentley Continental team-mate Rick Parfitt Jnr, BRDC Superstar and MSA Team UK driver Morris is nonetheless delighted to have been asked to partner Dolby in the ultra-competitive GT Open.

“I’m looking forward to the weekend immensely”, he commented, “I have raced a Lamborghini before, but not a Gallardo like Craig and I will be sharing at Monza, so it’s going to be fantastic to have that opportunity. Craig is an outstanding driver and has a lot of experience and I’m grateful to him for extending the invitation to race with him this weekend.

“Even though the British GT season has ended, we’re actually going to be busier than ever over the next few weeks as we have the GT Open and then I’ll be racing in the VLN again at the Nurburgring the week after, and Spa the weekend after that. Full focus is on GT Open this weekend though and I’m confident Craig and I are going to be a competitive pairing.”

Like British GT, the International GT Open features some of the most exotic race cars in world motorsport. In addition to Lamborghini, the championship includes Ferrari, Mercedes, McLaren, Porsche and BMW.

Morris’ team-mate Craig Dolby has experience of Blancpain Endurance Cup, Blancpain Sprint Cup, the FIA World Endurance Championship and he was Vice-Champion in Superleague Formula in both 2009 and 2010 in the Tottenham Hotspur branded entry.

Notably, the pairing’s Lamborghini will be engineered by Simon Dowson who worked with Morris when he contested the world-famous Rolex 24 at Daytona in America back in January, where the Marford driver raced a Cadillac DPi-VR prototype after winning the 2016 Sunoco Whelen Challenge.

Looking ahead to the weekend, Dowson said: “It’s great to be working with Seb again, he has had a great year so far from driving the Whelen Engineering Cadillac at Daytona to winning British GT with the Team Parker Racing Bentley. The whole Wessex Vehicles team is looking forward to seeing the exciting driver combination of Craig [Dolby] and Seb working together at Monza this weekend.”