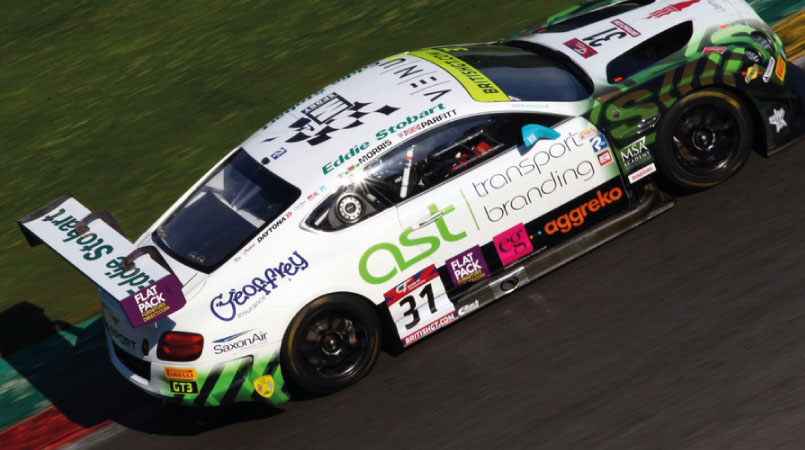 Carrying a 10.5 point lead into the final race of the season, after rocketing back to the top of the standings last month at Brands Hatch Grand Prix Circuit thanks to a sensational third victory with team-mate Rick Parfitt Jnr, everything now boils down to the eagerly awaited two-hour finale.

Whatever happens at Donington Park a few days from now, Marford driver Morris has once again been a standout performer in only his second season of British GT competition with Team Parker Racing and the thunderous No.31 Bentley Continental GT3.

With three wins, at Rockingham, Silverstone Grand Prix Circuit and Brands Hatch, another top three points finish at Spa-Francorchamps in Belgium and consistent scoring across all nine races contested so far, Morris and Parfitt Jnr have put together a tremendous campaign.

Additionally, Morris’ pace has been beyond compare on several occasions with the fastest ever GT3 lap at Oulton Park’s International Circuit at the beginning of the season, plus a new GT3 lap record at world-renowned Spa earning him the Sunoco Fastest Driver of the Weekend accolade.

While arriving at Donington with the points lead is an ideal position to be in, the flip side of the outstanding victory during round nine at Brands Hatch is the ‘success penalty’ which comes with race wins in British GT.

Meaning Morris and Parfitt Jnr will need to remain in the pits for 20 seconds longer than the title rival No.33 Lamborghini Huracan of Jon Minshaw and Phil Keen during the mandatory mid-race driver change pit-stops, the handicap could prove crucial in the destiny of the championship crown.

Bearing in mind, though, the Bentley Continental GT3 pairing have won all of the races longer than 60 minutes in duration this season, confidence is justifiably high going into the two-hour finale which is likely to be an absolute barnstormer.

“We’re immensely looking forward to the last round, the car is good, we’ve improved the traction and we’re going to Donington off the back of a very good test where Rick was incredibly fast”, said BRDC Superstar and MSA Team UK driver Morris, “We’re really good in the first and second sectors, and even with the 20 second success penalty we’re confident and not feeling any pressure at all.

“We’ve got the championship lead and we’ll go to Donington and do our usual thing. Rick and I are in a very good mindset, we’ve won all of the true endurance races this season and we’re definitely up for this. Hopefully we can bring the championship title home, we can’t wait for next weekend!”

Opening practice for the British GT competitors at Donington Park GP Circuit will get underway at 09.40 on Saturday, 23rd September, with session two following at 12.30 and qualifying beginning at 16.25.