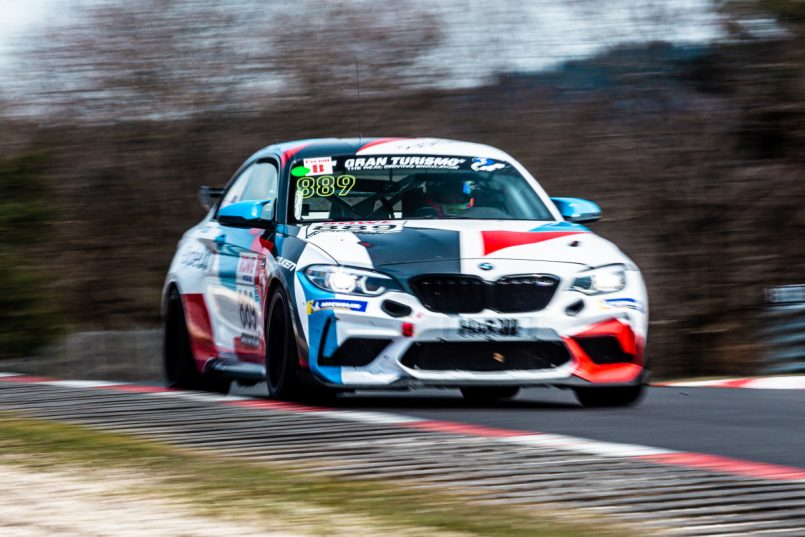 Posted at 06:01h in Uncategorized by sarah

Well over three years since his last visit to Germany’s fearsome Nurburgring-Nordschleife, highly rated racing driver Seb Morris performed as though he’d never been away during round one of the Nurburgring Endurance Series – the Welshman scorching to second place in class.

Called-up to action for the four-hour race on Saturday, 17th April, by leading squad Walkenhorst Motorsport to join fellow Brits Will Tregurtha and Matt Greenwood in the Purple Dot No.889 BMW M2 CS, 25-year-old Morris produced a typically fast, committed and uber-professional showing.

As the longest and most demanding track in global motorsport, the 24-kilometre Nordschleife is far from a straightforward prospect at any time but Chester’s Morris immediately got down to business and showed precisely why he is held in such high regard in GT endurance racing.

“It was a really good weekend”, said the 2017 British GT Champion and former Bentley factory driver, “The Walkenhorst guys were very welcoming and it was fantastic to be back at the Nordschleife for the first time in over three years. It’s important to keep my ‘A’ permit valid for racing there, as there may be some opportunities to race in the 24 Hour later in the year.

“The last time I was at the Nordschleife we were challenging for the podium in a GT3 car, this time we were on the podium on my first outing in the brand new BMW M2. I hope to be able to do more races like this during the year, I’ve shown again I can jump into any car with a late call-up and get the job done.”

Tregurtha took qualifying duties on Saturday morning and delivered the second fastest time to set things up nicely for the race, which he started. Morris took over for the middle stint and went on to set the fastest lap of the Permit B cars in the Cup5 class. Greenwood completed the race for the Purple Dot supported Walkenhorst Motorsport trio, taking the flag second of the Permit B cars.

“The Nordschleife is so technical and difficult, so an hour-plus racing there does feel longer than the same time in a car anywhere else”, added Greenlight Sports Management racer Morris, “As our car was a ‘Permit B’ car we had 100hp less than the Permit A cars in class, but I was still able to mix it with them and use my experience through the corners.

“Will [Tregurtha] did a great lap in qualifying and it was good to work with him and Matt [Greenwood]. It was nice actually to get a proper stint in the car, I did about one hour and 20 minutes, and I’m delighted to come away with such a strong result. I’m now aiming to try and do some LMP prototype stuff and find a drive there, or something back in GT3. We’re working hard.”